Lalu Prasad and Nitsh Kumar : Unsurprising, and unceremonious end to an unholy alliance.

[vc_row][vc_column][vc_column_text]Little less than two years ago, a very unholy political alliance was forged between some of the most disparate, ideological polar opposites, in the Indian state of Bihar. The newly victorious prime minister Modi and his BJP on one side, and all of India’s opposition on the other. BJP’s one time ally, and very respectable chief minister of the state, Nitish Kumar spearheaded this unholy coalition which was doomed to fail.  Nitish Kumar joined hands with Lalu Prasad Yadav, who spent time in jail for corruption, and there by debarred from ever running for office again, and the Congress party, which is already on life support. Just to add to the fun of it, the so called anti-corruption knight in shining Armour, Kejriwal too lent his weight to this coalition. Let’s talk about Lalu Yadav for second.[/vc_column_text][vc_gallery interval=”0″ images=”1362,1361,1360,1359″ img_size=”large”][vc_column_text]As corrupt as Indian politicians are, it is extremely rare for any of them to actually be punished by law. The judiciary is frustratingly slow and inept, and most accused usually end up meeting their maker before ever seeing the inside of a jail cell. The cases drag on for decades, and usually get stricken off on technicalities or dropped altogether by the governments. Prosecutions are done by government in India, not by independent prosecutors. The reason for my brief digression is to drive home the point that Mr. Yadav’s corruption is so bad and so brazen that even India’s lax judicial system couldn’t protect him. He was convicted and barred from public service forever.

Anyway, It is 2017 now, and as some including I, have predicted the coalition collapsed under it’s own corrupt weight. To top it off, Nitish Kumar took less than 24 hours to hitch his wagon to his election rival BJP, there by ascending the CM’s throne, barely giving time for the ink on his resignation letter to dry. What happened, between the time of the election, and in the two years since, and the spectacular climax of this week’s developments is a study in the political astuteness and pragmatic attitude of both Modi and Nitish Kumar. It also acts as a stark reminder of the pitfalls of building castles on shaky foundations.[/vc_column_text][vc_column_text]So what the hell happened in the first place? Why did the very principled and smart politicians like Modi and Nitish decide to be at loggerheads? After all, they were once allies, and the coalition government in Bihar was one of the best ones seen in recent decades. Both Modi and Nitish were branded as “development” politicians, and they had more in common than most other political allies usually have. Then what changed? Why the sudden change of policy and partnerships?[/vc_column_text][vc_row_inner][vc_column_inner width=”1/2″][vc_column_text]

Modi has just conquered the country, he wanted to entrench his power. 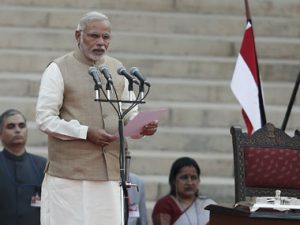 [/vc_column_text][vc_single_image image=”1373″ img_size=”large” onclick=”link_image”][vc_single_image image=”1375″ img_size=”large” onclick=”link_image”][vc_single_image image=”1377″ img_size=”large” onclick=”link_image”][/vc_column_inner][vc_column_inner width=”1/2″][vc_column_text]Even before the national elections were declared, Modi and Nitish have been clearing their respective decks. Six months before the election, Nitish broke off his long running partnership with his BJP. His only reason was BJP selecting Modi as PM candidate. Modi, who is supposedly a “fundamentalist” intent on destroying the secular fabric of India. An utterly unconvincing argument, given how he was so chummy with Modi up until that point. Nitish didn’t anticipate the absolute majority that Modi would win. In stead, he was hoping for a hung parliament of sorts, in which Nitish’s party would command lot of control holding key to the power. Alas, it wasn’t to be. Modi surprised everyone, including his own party, with BJP taking majority in the house without even counting its allies. The Modi wave in that election was real, and decisive. Nitish has underestimated his opponent, and it was too late to turn around.

Having just taken the top job in the country with an unprecedented majority in the Lok Sabha, Modi thought he has the whole country in his fingers. He was emboldened to push his agenda and his party to all corners of the country. He successfully managed to force a better deal with his long term partners in the state of Maharashtra, and reaped its benefits. BJP went from a cabinet partner with very little influence on policy to the head of the table, taking the CM chair. Having done this in a state, unseating a very strong regional party gave Modi and  Amit Shah the courage and leeway to go down that route in other places. They wanted more states under BJP rule, and build a solid foundation for the next general election. They wanted BJP’s win at the center to be a repeating event, not just an anomaly. Their once main rival Congress party was dead for all practical purposes, and BJP would need to win these many battles with regional parties. If some of those parties are their partners, too bad, they will just be collateral damage.

So when the state elections for Bihar elections came along, both Modi and Nitish redoubled their efforts to outdo each other. Modi wanted to consolidate his power, and Nitish for his part, believed he could be the face of the united opposition. With no viable leaders from Congress or any other parties, Nitish was convinced he could be formidable opponent to Modi. All he needed to do  was to rally all other parties behind him and prove his mettle in Bihar. The rest of the country would follow.

Nitish gave a platform for all the disparate band of parties. The only common thread between them is their hatred for Modi, and a sheer desperation that their prospects of ever winning in the center slipping away. I used the words disparate to describe this group because it consisted of Rahul Gandhi of Congress, Mamta Banarjee, Mulaayam Singh, all corrupt to the core, and then, Arvind Kejriwal of AAP, the so-called anti-corruption champion. The sheer hypocrisy and opportunism of this mangled alliance was bare open for everyone to see, but the caste politics of Bihar meant that Nitish Kumar prevailed by a small margin, only dulling the euphoria around Modi by a little bit.[/vc_column_text][/vc_column_inner][/vc_row_inner][vc_column_text]

So how did this unravel?

Modi and Nitish are pragmatic leaders. They do not let their ambition blind them to the ground reality.  Nitish was quick to realize that the strong and united opposition that he dreamed to lead was never going to materialize. One after other, Nitish saw Modi and BJP winning elections for state assemblies with relative ease and big margins. Particularly disheartening was their win in the largest state of the country, Uttar Pradesh. Everyone hoped for a miracle of sort, with these being the first elections after Modi’s “demonetization” gambit. The opposition and most in media hoped for public to be angry at Modi for the way he implemented it. There were tales of common man suffering due to cash being not available. There was also a hope that the wealthy donors will turn against Modi as he hurt them financially. However, none of that happened. Modi’s BJP won in a landslide, killing all and any hopes of a resurgence in opposition.

Nitish, always the man to pick winner, seems to have seen the writing on the wall. Would he rather lead a gang of squabbling opposition with no chance of ever winning anything, or cut his losses and join Modi with whom he shares policy and ideals anyway? The choice was very easy to make for him.

Modi for his part, didn’t want someone like Nitish leading the opposition. He is not just happy with retaining power, he wanted the majority required to make any meaningful legislation. Given both Lok Sabha and Rajya Sabha are required to pass laws in India, he wanted states to support him. This is why he is showing restraint in pushing his party in states like Andhra Pradesh.

Once they both came to that realization, Modi set a series of actions in motion. This is where I am a bit uncomfortable with his tactics. I am not naive enough to believe that the CBI has suddenly found evidence to go after Lalu Prasad’s son in a decade old case. The timing is very suspicious. We have seen similar tactics in Tamil Nadu as well. The only consolation for me, personally, was he is doing the right thing, even if it is for the wrong reasons.

Anyway, Modi gave Nitish’s a great excuse to get out of his alliance with Lalu. Lalu Prasad had no choice but to stay stubborn and demand to stay in government. This played nicely in the media showing Nitish as someone who’d rather lose his job than to mollycoddle with a corrupt family. The family was as corrupt two years ago as it is today, but who is asking? The rest is history, BJP and national media praised his courage  and  integrity.  He was a martyr who’d rather sacrifice power than be in bed with corrupt politicians.   Nitish suddenly found support from BJP which helped him re-take the job he quit less than 24 hours ago.[/vc_column_text][/vc_column][/vc_row]