Delhi rapist :He is not just a rapist, he is a murderer, an evil incarnate, and he is no juvenile

One of the biggest tragedies of being a rape victim is when the society and judicial systems fails them. Especially in a country like India, where the victims are often ostracized while the culprits often get off scot-free, girls and women from all walks of life are afraid of fighting back against those sickos that harass them, tease them, touch them inappropriately and in the worst cases rape them and kill them. The gross failure of the police, judiciary and the political system of the country in protecting the females against sexual violence is a black mark on our countries soul. A country can develop all it wants, break into the top tiers of economic ranks, achieve lofty scientific goals, but it all amounts to nothing if the women of that country can’t live a safe, peaceful, and productive life.

The whole world was shocked two years ago, when an innocent 22 year old girl was brutally raped and murdered by a gang of men in a moving bus. So heinous was the way that poor girl was tortured, that the entire country of India erupted into protests. Every single man with a modest sense of decency held his head in shame, and the government of India finally had to enact a law, called “Nirbhaya” act, in honor of the brave girl who lost her life that night. Many felt that, the slain girl, who was given the moniker Nirbhaya in lieu of her real name, to protect her family’s privacy and respect, has actually precipitated a water-shed moment in India’s modern history, and the conditions of safety and security would be better going forward. However, what happened yesterday, has rudely awakened us from the false sense of security and jolted us back to reality.

One of the offenders, due to his age at the time of commission of the crime, was released yesterday, after serving just two years in a correctional “school”. Yes, not a jail, but a well looked after, well fed, glorified boarding house. He was 16 when he brutally sodomized, raped, and did things so horrible to that poor girl, that her internal organs were mangled, and he threw her off the bus to bleed to death in the most painful manner. Notice how I am only saying “He”, that’s because his name was not released to protect his rights, he will not have a record of this crime against his name, and there is not a damn thing that anyone can do to him. Mind you, the four other perpetrators were sentenced to death for the same crime, and just because this sorry excuse for a human being was a few years younger, he spends two years in a boarding school before being released back to the society. How utterly shameful.

I am writing this with tears in my eyes. I can not pretend to understand the pain that poor girl went through. I can’t begin to imagine the pain and loss her parents had to endure. Now, I feel like the Indian legal system has raped her all over again.  There were pictures of Nirbhaya’s parents pleading authorities to keep the monster behind bars, and hoards of people from all over the country protested loudly, and yet the courts of the land preferred to uphold an archaic law written 300 years ago, instead of doing the right thing. I held my head in shame two years ago when the incident happened, and I am doing it again as I watch in dismay what the legal system has done to the poor girl’s memory.

One other thing that bothers me the most was the press coverage around this release. Every newspaper headline, every television anchor, seems to miss the magnitude of the crime here. They keep saying “Delhi rapist” to be released, “Delhi rapist to be freed” as if the biggest crime in that episode was rape. The real and more egregious crime was that the girl was not only raped, but was brutally assaulted. She was sodomised with mechanical devices so badly that her internal organs were destroyed beyond repair and recognition. The headlines should read “Sadistic Delhi murderer to be freed after a two year picnic”. But, the current crop of Indian media, not known for their professionalism nor journalistic values, took the lazy way out, and keep insisting the so called juvenile is just a “rapist”.

Nirbhaya’s parents have come out of secrecy and revealed her real name to the world. ” We are not the ones to be ashamed, we are not the ones to be hiding” her mother said fighting back tears. “Our daughter’s name was Jyoti Singh, and we are forever proud of her” she declared. Look at the pictures below of a young and bubbly Jyoti, and the her brutalized body fighting for her life after the attack. 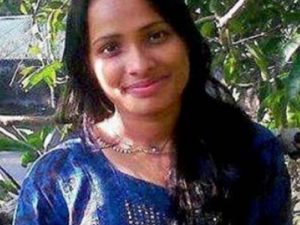 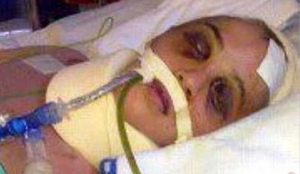 And so are we. We are sorry that our society has failed you, we are sorry that the animals that roam our streets have taken you, but we are proud of you for being the martyr that could change the plight of woman in our country. But, for now, please forgive us not serving the justice your deserve. Our hands are tied by meaningless laws, and our leaders are preoccupied with meaningless issues. We will pledge  to protect our own women with our without  help from government.

I really hope that someone will soon reveal the identity of this bastard and someone else will also  make sure he pays for the sins he committed. And when that day comes, I will then raise my head and look at the women of my country in the eye again.