Take a look at this picture below. It was a picture of the funeral procession of the recently slain Vikaruddin, a known terrorist, a hardened criminal, and all-in-all a disgusting human being. He was under trial for killing two police officers, firing and injuring a few more officers and civilians, and looting banks in not one but three differetn states. He was also arrested for plotting the deaths of the then chief minister of Gujarat, Narendra Modi who went on to become the prime minister of India.

Now, his people, I am not going to explicitly state who, but his people, not just his close relatives and friends, whose burden it is to bury him no matter how bad he is a human being, but his people in general, lined the streets of old city Hyderabad in India, giving him a heroes funeral. No such respect for the  four policemen who died last week in shoot outs with members of his gang, but this scum of the earth, a burden to society and a danger to humanity gets hundreds of religous lunatics hailing him a hero. This sort of blatant display of treasonous behavior will not be tolerated anywhere else in the world, but alas, India is an example of spineless politics, religion based vote banks, and no politician has come to the defence of the police officers who had to defend themselves on that day. No one had the guts to call this monster for what he is, a heinous terrorists not worthy of the sympathies of anyone.

A really shameful day for secularism, and basic human decency in India. 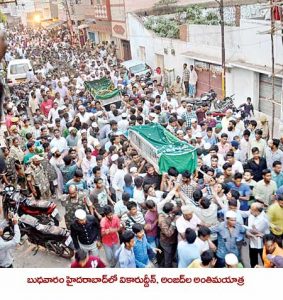