Democracy not the right thing for a country like India 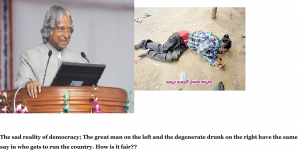 One look at this picture, and we will know why Democracy is probably not for India. On the left is a great scientist who heralded India’s progress in space exploration, and immediately to his right is a drunk who passed out on the street after drinking free liquor at an election rally. And come election day, both these men get the same number of votes in deciding who runs the country. How the hell is it fair and how is it right for the country?

Most of her people are poor, uneducated and have no sense of social and civic responsibilities. And they can be bought by the feelings of Caste, religion, money and liquour.

What India needs is a serious discussion about its voting eligibility and democratic practices. Until then, our country is left at the mercy of degenerate drunks and useless scoundrels.  Start thinking about it.