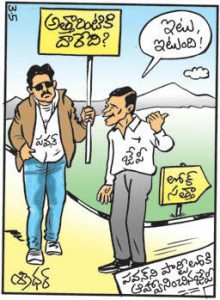 Eenadu’s take on this whole thing.

With the rise of an active and popular AAP at the centre, Andhra Pradesh’s Lok Satta finds itself becoming increasingly irrelevant. Its founder president JP Narayan is now desperate to be in vogue, and is trying to invite all kinds of people into his party. I suppose personal morals and ethics don’t mean much to him now, compared to the star power he so badly needs. Its just pathetic.

Pawan Kalyan’s fans used to say his personal life shouldn’t matter and he should just be judged as an actor. I am ok with that theory, except that when he wants to be in politics and dictate morals to others, his own personal failings should be discussed and judged. I am so disappointed in JP now, and I sincerely hope his party fades away, before causing more damage my splitting the anti-congress vote once again.