[vc_row][vc_column][vc_column_text]I think its time to open up a new forum to secede from the unlawful Indian Union after the shameful way we were treated in the parliament. Even the British were more courteous to both sides when they split India in two.

Here is my new agenda.
United Godavari Districts –> New country consisting of East and West Godavari districts. Just like the United Arab Emirates. In 10 years, such a new country would be the envy of the world. We have all the resources required to build a powerful and successful nation, and the work ethic of our people is second to none.

KG basin alone can sustain us for the next couple of centuries, and the agricultural land in our districts is one of the most fertile in the world. And don’t even get me started on the academic excellence of our people.

So, here is to hoping a swift and painless cessation from the Union, here is to stop being treated like worthless cretins, here is to putting an end to the decades of exploitation from the Gandhi family in Delhi. Here is to a big hope, and a renewed struggle for justice. 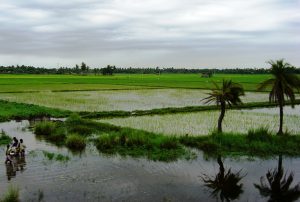 A particularly fertile bit of land in East Godavari District

Envy of the world