At times it was excruciatingly painful to watch, at times it was inspiring, but the entire three and half hours of brutal tennis between a half injured Nadal and a blood thirsty Wawrinka was an experience neither of them would forget in a hurry. 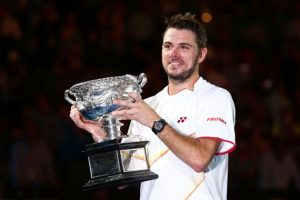 I had very little sympathy for Nadal, because he used his body as part of the arsenal he brings to the tennis fight. It was his body that helped him beat his opponents who weren’t nearly as fit and as strong as him. And with all the workload, it is but natural that his body starts showing signs of fatigue, and that is a problem entirely of his making.

What would have happened if Nadal didn’t get injured mid second set. We never know, but going by how Wawrinka decimated Nadal’s first set, when he was serving at upwards of 180+KMPH, it is only fair to say that Wawrinka would have prevailed Nadal none-the-less. Mind you, here is a guy who beat the supremely confident Novak in the quarters like it was nothing.

So, in the end, kudos to Stan, the man. The Stanimal. Well done, and congratulations.